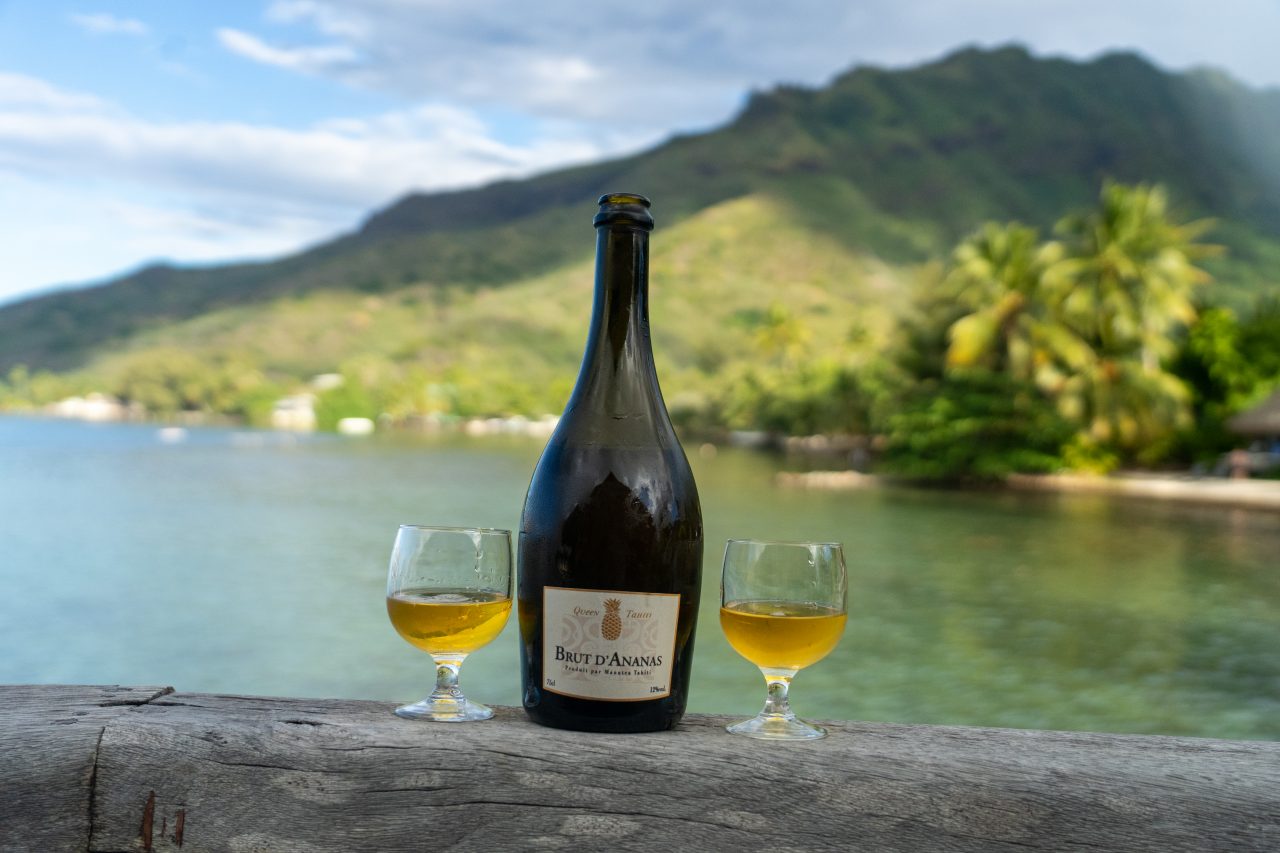 Tropical Go is supported by its audience. When you purchase through links on our website, we may earn affiliate commission.

We won’t lie to you. Some islands in French Polynesia are very challenging if you’re vegan or vegetarian (looking at you, Tikehau and Hiva Oa!), while others are incredibly easy. Fortunately, an abundance of fresh fruit and vegetables throughout many of the Islands of Tahiti make this South Pacific destination a plant-based foodie’s delight. Here’s what you need to know about being vegan or vegetarian in French Polynesia.

Traditional Polynesian fare meets French cuisine–that’s what you’re likely to find on most of the Society Islands of French Polynesia, like Tahiti, Moorea, and Bora Bora. There’s also a strong Chinese influence with rice and noodle dishes. Once you venture further afield to the Austral Islands, the Tuamotus, and the Marquesas, root crops, vegetables, rice, and fish make up most of the meals.

There’s a rumor that Moorea has the sweetest pineapples in the world, though there’s only one way to know for sure! Head to any local produce market, like Papeete Market on Tahiti, and you’ll find heaps of fresh produce. Papayas, mangoes, bananas, guavas, starfruits, pineapples, and citrus fruits are all ready to delight.

Don’t skip out on trying pamplemousse from the Marquesas, pineapple from Moorea, or a long and slender fruit called the “Ice Cream Bean” that when opened, tastes like toasted marshmallow. Soursop is a creamy and tart spiked fruit that resembles sorbet if you eat it chilled or frozen.

Some resorts and pensions on the islands serve homemade jam made from local fruits alongside a fresh baguette for breakfast.

There are few places in the world where vanilla is grown, and the Islands of Tahiti are one of them. Purchase vanilla beans on their own to use in your own cooking, or chuck it into a bottle of rum to make a vanilla spiced delight.

The classic dish around the islands involves fish smothered in a creamy vanilla sauce. This isn’t vegan, but we’ve had some luck asking for cassava (a starchy root cop) cooked in the creamy vanilla sauce usually reserved for seafood. And it’s delicious!

Po’e is a traditional Tahitian dessert made from boiled taro. It’s warm, doughy, filling and sticky. The best po’e is mixed with banana, papaya, or pumpkin and drizzled in sweet coconut cream. It’s typically vegan.

Come sunrise, locals start their day with a baguette in hand (typically vegan). Baguettes are fixed price in French Polynesia, making them one of the best things to eat if you’re on a budget. Pop into any patisserie and you’ll find fruit tarts, croissants, macarons, profiteroles, eclairs, and the list goes on. Many of these treats are made with eggs, butter, and cream, though occasionally they’re made with margarine.

Save your duty free allowance on the way home! There are a handful of places to shop for a boozy souvenir.

On Moorea, head to the Manutea Tahiti Distillery and shop for pineapple brut, Tahitian rum punch, and devilish liqueurs. On Taha’a, watch how rum is made at Rhumerie Mana’o and take home a bottle of vanilla spiced rum. The island also hosts the Domaine Pari Pari rum distillery.

The atoll of Rangiroa is home to Vin de Tahiti, the world’s only atoll winery! It serves refreshing glasses of rose and white wine. Grab a glass at Relais de Josephine and head to Tiputa Pass, where bottlenose dolphins often perform aquatic acrobatics.

The ahima’a is a traditional underground oven which slow cooks meat and vegetables. Sometimes, vegans and vegetarians can score a hearty, smokey meal from an ahima’a by dining on root crops and banana leaf parcels of taro leaves cooked with onion and coconut cream. Ahima’as are often used during tama’ara’a, a traditional feast.

The breakfast of choice for many Tahitians is firi firi, fried dough with coconut milk and occasionally powdered sugar. They’re formed either as long strips or into a figure-eight. Have it with jam, sugar, agave syrup, or dunk it in your coffee.

The most popular meal in French Polynesia is undoubtedly poisson cru, made from raw fish marinated in lime juice and coconut milk, mixed with finely chopped cucumbers, tomatoes, and carrots. However, it’s possible to D.I.Y. this dish using small cubes of firm tofu instead of fish, and adding a few strips of dried seaweed on top to give it an ocean flavor. You probably won’t find this dish at any restaurant, but you could make it at your accommodation.

Do Your Research and Modify

Many restaurants and accommodations post their menu online. You’ll see that meat and seafood are the staples of just about every food spot on the islands. But, many restaurant have cooked vegetables as their sides. You might be able to get a vegetable chow mein, stir fried vegetables and rice, and a vegetable sandwich at many ‘seafood only’ places. Pizza places are also a great bet for finding vegetarian or even vegan meals, but you’ll have to nudge them to load up on the toppings.

Guesthouses, called pensions, often offer full or half-board options where your meals are included, especially on the outer islands where there might not be any restaurants or shops nearby. Notify them ahead of time of your dietary requirements. Many pensions will assume you eat fish. Message them in French saying that you don’t eat fish, but that you’re very happy with vegetables and rice. You may need to bring your own source of protein to add to each meal, like lentils, chickpeas, beans, etc.

Check out the Roulottes

Roulottes, food trucks, are found mostly on Tahiti, Moorea, and Bora Bora. They’re usually clustered together, and you can get variety of foods like savory crepes, pizzas, noodle dishes, rice dishes, and traditional Polynesian fare. If you’re traveling in a group with mixed tastes and diets, this is your best bet for pleasing the crowd.

Book Accommodation with a Kitchen

Once you venture to the Tuamotus, Austral Islands, and the Marquesas Islands, it’s rare to find restaurants outside of the main towns. Even in town options can be limited. But, most of these places have a small shop where you can purchase dry goods, sauces, and a range of fruits and vegetables. Many pensions offer access to a communal kitchen, which saves you the cost of booking a full guesthouse for yourself. Think simple and be creative when cooking here. A go-to could be pasta with a lentil bolognaise sauce.

Upscale accommodation tends to be more accommodating to different dietary requirements. If you want great food and are willing to pay for it, check into a four-star and up hotel over a pension.

Chantae is the Coconut in Chief at Tropical Go. She is the author of Moon Bali & Lombok and lives in Suva, Fiji. She is a freediver, scuba diver, and surfer who loves surfing without a wetsuit. Her drink of choice is a margarita. 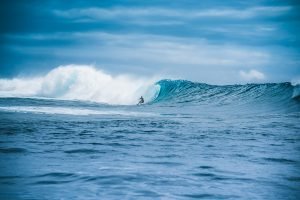 Surf Guide to the Islands of Tahiti 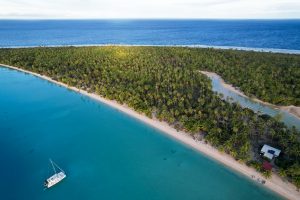 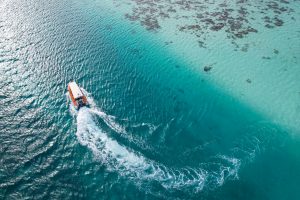